Too often, I see my kids playing video games. Then their behavior gets a little out of control, so then we end up implementing a TECH STRIKE! No video games, no television, no tablet; just blocks, art, and books. It works well; however, there seems to be a pattern. Once they get back their tech it's just more getting in trouble again. So, is my virtual babysitter not working? Yes, at least not to the extent it needs to be. The solution we’ve found is kind of surprising—spending more time with my kids using the HTC Vive to correct the bad habit of just sitting, playing games, and getting little out of it.

I see Virtual Reality giving my family the entertainment experience that gets them exercising at the same time. So I picked up a game called Fantastic Contraptions. It has my son building these structures that you add wheels to move across the board to hit a target. The physics are pretty good. The gameplay during construction, you can break a sweat. And the graphics are cartoonish & a bit surreal. 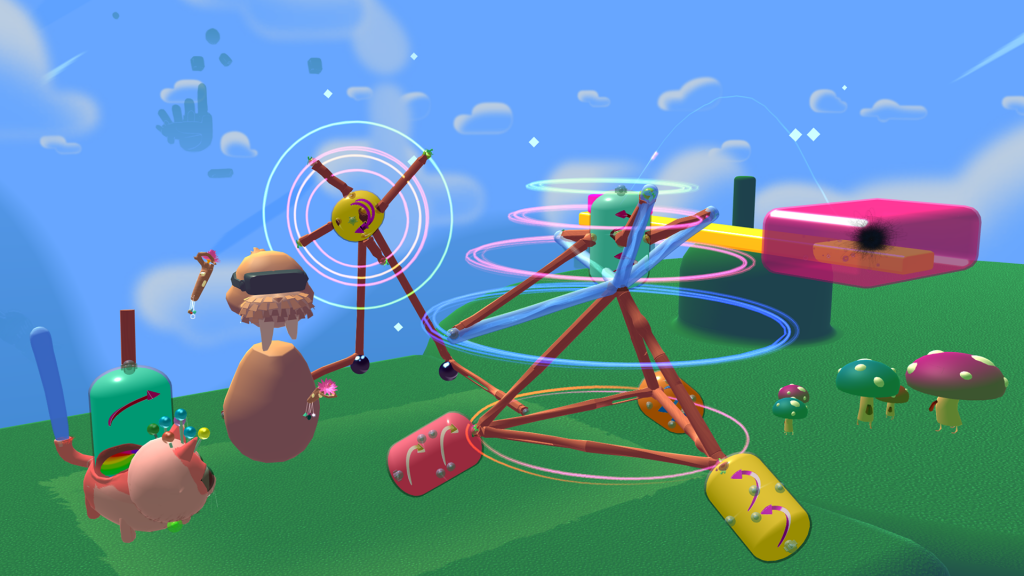 So now my family takes turns playing in Virtual Reality. My 9 year old builds structures and tests them, improving his problem-solving skills and his understanding of physics, even at a base level. My 4 year old plays in a virtual funhouse built on the Unreal Engine, allowing him to explore and using his imagination like he would if we had built the house right in our living room, and my wife tests our Google Earth and other travel games to explore the world from the comfort of the sofa.

Virtual Reality has its limits, however. VR can only really be used for minutes at a time. It is something that you have to take a break from at least every hour, or it gives the user a sense of displacement or dissociation. It is a little unsettling when I look over a cliff and get vertigo while in my living room. There is a study by Common Sense Media (it is an actual company and not just a myth of soft skills that everyone should possess) that shows that children who use VR should only do so for minutes at a time. It is kind of like swimming: in the water for 45 minutes only for the lifeguard to blow their whistle, ruining your good time for 15 minutes or so, while you get out of the water and freeze for a bit to get back to reality.

1. Keep it to 20 minutes. Not much I’ve seen in VR is worth spending more than 20 minutes inside, but even if you find the most spectacular scene that boggles the mind, take a three-minute break. Have a drink of water, see some natural light, and remind yourself of where your body actually is. Unlike in the real world, that VR sunset isn’t going anywhere, and it’s worth taking a short break to avoid disorientation and possible simulator sickness.

2. Unless the designers of the demo made walking a critical piece of the experience, sit down! The vast majority of accidents can be prevented this way, but not all of them. I’ve had people smash their heads into desks while using the HTC Vive. Even though the users knew the desks were there before the goggles went on, they forgot when they tried to lean closer to a virtual object on the virtual ground which brings us to…

3. Remove dangerous objects from the space. Tables with corners and glass tables are the biggest offenders, but there are also metal rakes, lit candles, cacti, etc. Take the time to clear the space of any and all hazards, no matter how small. After all, the whole point of gaming is to have an enjoyable experience, and getting hurt while playing detracts from that experience.

4. The hazard that is often overlooked: house pets. For safety, you should relocate your pets to another room. You won’t know if they wander into your space, and of course cats and dogs don’t know you can’t see them through the giant goggles on your face. Keep them in another room for the optimal safe experience while diving into the virtual world.

5. If you decide to do room-scale VR in which you walk around, which typically makes for the most engaging VR experiences, take a lap once you have the goggles on, that is, touch all four walls as the simulation starts. Give your body muscle memory of the physical constraints of the room, in my lab at Stanford, we embed this protocol into most of our experiments, even if the exercise breaks the illusion, having a physical reminder of walls is a good thing: virtual spaces are infinite; living rooms are not. The more you can remind yourself of this, the better off you will be.

6. Have a second person not using VR to act as a “spotter,” especially for room-scale VR. I know that VR as an industry will struggle to make its way into every living room if every user needs a second person to watch and assist. By definition, good VR challenges you with wild and intense experiences you wouldn’t have in the real world. Ducking, flinching, and even fleeing are all perfectly rational responses to many off-the-shelf VR experiences. Other than enlisting a vigilant friend who cares about your safety, I don’t know any way around this. Like scuba diving, VR is best served by the buddy system.

7. Watch out for safety warnings. Many VR systems will issue alerts as users approach walls but they are just accurate enough to be dangerous, as users learn to trust them unconditionally. They are correct lots of the time, probably even most of the time, but not all the time whether it’s a failure of hardware (a camera slips), a software bug, or the ever-changing world itself (e.g., a chair just happens to fall over once you go inside), mistakes will happen. You’re much better off trusting your spotter buddy and your instincts about the room itself.

Ok, so what do I do with this new way to raise my kids? I need to adapt some regulations and lay out some rules. This all sounds like common sense parenting right? What technology did my parents have to regulate? I think they got lucky with just fire, dangerous creatures in the yard, Atari, and the first Nintendo.

So now we make sure the kids get some VR exercise, then build with blocks, draw some art, read books, and clean the house. Common sense.

Heads in the Cloud(s): Why We Love Cloud Storage (And You Should, Too!)

Browsing Browsers: What Should You Use To Surf the Web

Microsoft Remote Desktop vs. TeamViewer vs. LogMeIn: Which Is the Right Remote Software for You?