If you’re into tech and scroll through your social feeds on any given day, chances are you’ve seen something related to new 3D printing technology. The advances come in many forms, some are for the medical field, some are for food, and as of late—some are for actual homes. Aside from this new advancement potentially solving a huge problem not only in the United States, but globally for those living in poverty, these homes actually look quite modern and contemporary.

The innovators behind this idea are from a Silicon Valley-based nonprofit called New Story, which is a housing charity organization. New Story worked with a construction tech company, Icon, to create a 3D printer that could print a house that is easily transportable.

The printer, dubbed the Vulcan, which was unveiled at this year’s SXSW, is able to produce a layout of a 350 square foot home in about 24 hours. After that, the roof, windows, doors, paint, and electrical are added to the frame, which takes around an additional 24 hours. The best part about the homes is they are completely up to code which makes this a safe living option for those used to dirt floors and paper-thin exterior walls. 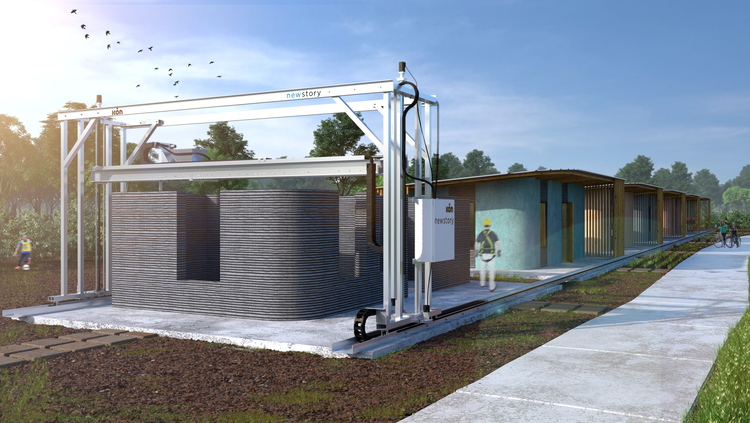 The Community of 3D Printed Homes

The printer uses a cementitious material known as mortar for the homes. Icon chose this material since it is a well-understood, affordable and resilient material. They also chose it since it has a high thermal mass which allows for comfort and energy efficiency. The other materials for the home (windows, doors, electrical, plumbing, etc.) are provided by Icon’s partners at Alchemy Builders.

What distinguishes the Vulcan from other 3D printers is that it is truly one of a kind. It fully prints on-site and does not print separate portions that need to be pieced together later. The Vulcan prints an “entire home seamlessly and it sustainable, produces nearly zero waste and is highly durable, low maintenance, and energy-efficient to operate.”

Now you may be wondering “wow I bet that costs a fortune!” Wrong! The home can be printed for a mere $4,000. That’s like $1,000 for each room the printed home contains. 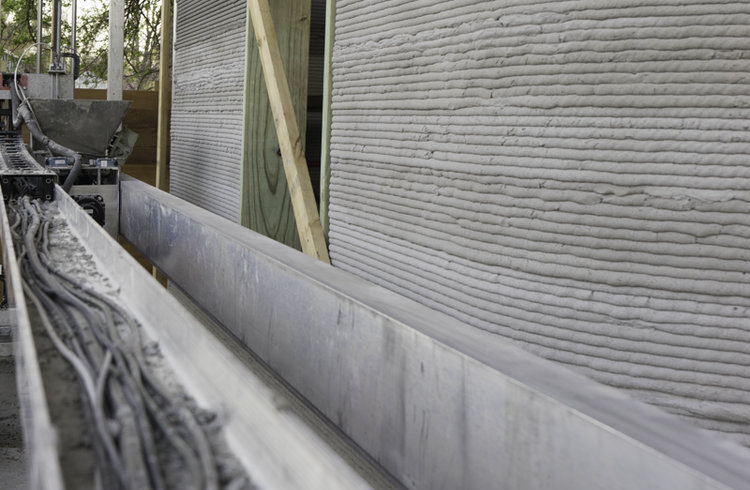 Exterior of the 3D Printed Home in Progress

“Conventional construction methods have many baked-in drawbacks and problems that we’ve taken for granted for so long that we forgot how to imagine any alternative,” said Ballard, “With 3D printing, you not only have a continuous thermal envelope, high thermal mass, and near zero-waste, but you also have speed, a much broader design palette, next-level resiliency, and the possibility of a quantum leap in affordability. This isn’t 10% better—it’s 10 times better.”

The great thing about using a 3D printer to create homes is that it is all software based. This means the ideas for customization are nearly limitless. Ballard stated, “I am also personally involved in a team working on the NASA 3D printed habitat challenge and we are beginning the early explorations for design in space.” 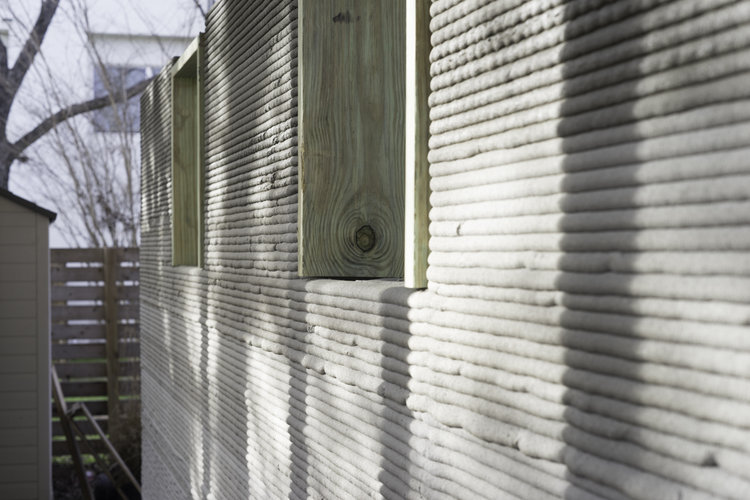 A Close Up of the 3D Printed Home

While all the above is wonderful, New Story is facing a conflict of their own with this advancement. New Story is known to be a huge advocate for creating job opportunities, so it somewhat burned them when they realized the homes only require about four workers total. However, the payoff is that this creates a broader variety of jobs: instead of solely construction contractors, workers now have the opportunity to have titles such as system operators, maintenance, and software developer. 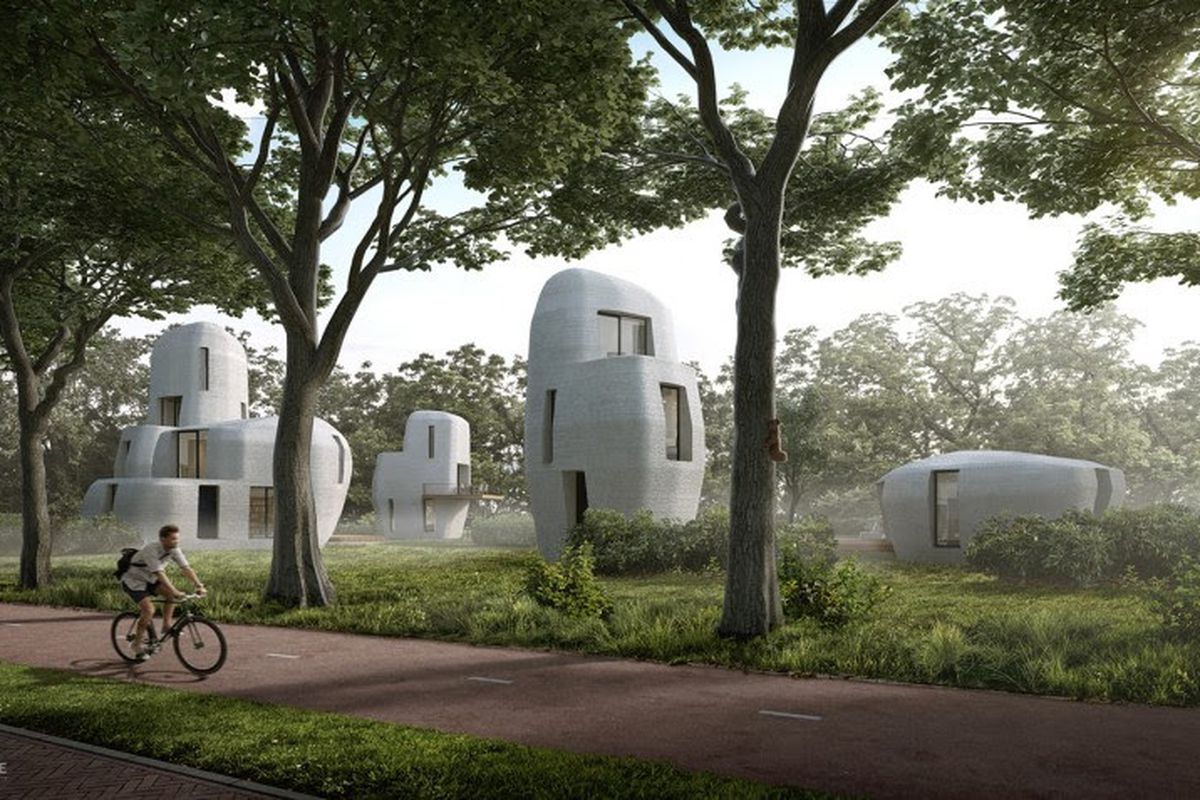 New Story and Icon are not the only players in the 3D printed homes game. The video below also shows that a team in the Netherlands are 3D printing homes of their own. The team, dubbed “Project Milestone,” named to mark a “special moment in time we’re doing something unique together,” are on the path to creating five unique printed homes. They say that the name “also says something about the object we’re making,” which a fully 3D printed home is certainly a milestone in itself. Similar to Icon, the homes are constructed from a type of concrete that is extruded through the 3D printer and are completely up to code.

Project Milestone homes differ from Icon’s aesthetically as they are much more artistic (but that doesn’t mean they aren’t still functional). Another difference is that these homes aren’t printed all at once. In the video, you can see multiple pieces being printed, that are then constructed together. The homes are also expensive, a major difference from Icon’s low price of $4,000.

As a tech company who uses 3D printed materials on projects to help in the office, and some just for fun, we’re all for it. While some are sketchy about the advancements in technology, there is no denying that implementing the technology into an industry that isn’t thought of to envelop much technology into their work really shows the benefits this technology can have on the entire world.

THE NEW GMAIL: Google Is Breathing New Life into Email

The Business of I.T. and Time Relativity: A Brief History of Armor